Arthur Nishimoto, a graduate student at the University of Illinois, might have created the greatest unofficial Star Wars game in history. It’s called Fleet Commander and it uses Star Wars iconography in a multi-player, touch screen, strategy action game. And he just did it for school. After the jump, you can look at video of the game being played on a giant 20 foot screen, read some of the specs and link to Nishimoto’s website where he explains his process. 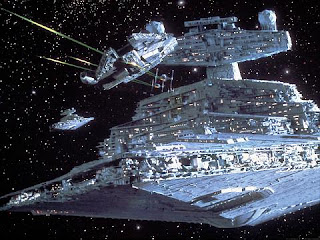 Thanks to Crackajack, a German site (which you can view translated right here), for the heads up.


How cool is that? But that’s just the latest iteration. Nishimoto actually made the game for a smaller screen and had to port it up to that massive one. Here’s another video.
Over on Nishimoto’s site, he gives a pretty layman description of the game and what he was going for but the simplest description is probably just from the YouTube.
Developed at the Electronic Visualization Laboratory (EVL) by MS graduate candidate Arthur Nishimoto, “Fleet Commander” explores how a real-time interactive strategy game that would typically rely on complex keyboard commands and mouse interactions be transferred into a multi-user, multi-touch environment. Originally designed for use with TacTile, a 52-inch multi-touch LCD tabletop display, “Fleet Commander” game play has been ported to  EVL’s 20-foot wide multi-touch LCD wall, Cyber-Commons. “Fleet Commander” uses Processing, an open source programming language.
I don’t pretend to know what most of that means, only that the game looks incredibly fun to play and Lucasfilm should buy it from him and port it to WiiU or something that’ll have massive touch screen potential.
Do any of you develop games for a living? Is what Nishimoto did actually as impressive as it looks or is it pretty standard stuff for someone who lives in this world?
Posted by kobosei at 6:20 AM

Games You Are Looking Forward too